I’m very pleased have another query to answer from a listener to More or Less. And what a great question: 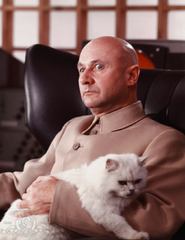 I am embarking on a Career as a James Bond baddie, and I want to make sure everything is very carefully planned.  I am under no illusions that Commander Bond will thwart my first efforts to take over the world, however I am keen to become a recurring character, and that’s where you come in.

I intend to escape from Mr Bond at the last minute and I intend to populate an island or other planet, depending on budget.  However I am not clear how many men and how many women I will need to take with me to ensure we do not have issues with inbreeding in the population creating genetic disorders and the like.  How many people do you need to create a new race of people?

END_OF_DOCUMENT_TOKEN_TO_BE_REPLACED

Some surprises in store for Concestor 23

When I helped write the Ancestor’s Tale, one of the big tasks was to make a human-centred tree of life: to list of all the point at which, backwards in time, the human lineage joined with lineages of other extant lifeforms. In February last year I was forwarded an email from someone using these “rendezvous points” as the basis for a song and story for children. She had seen the O’Leary  paper and wondered how much revision was needed to our original list.

For those who wish to skip to the chase, I’ve come up with a new list at the end of this post. END_OF_DOCUMENT_TOKEN_TO_BE_REPLACED

Many of the rarest and most endangered species we know of are plants. The sad story of Hibiscedelphus woodii, which I’ve only just read about, is not atypical. Of the 4 last known specimens, on a cliff in Hawaii,

three individuals of H. woodii were apparently crushed by a large fallen boulder and died between 1995 and 1998. on 17 August 2011, the last remaining H. woodii was observed dead. [zotpressInText  item=”X8HWMKBN”]

The unfortunate (but appropriate) choice of this as a endangered species at a recent event for the Society of Biology, prompted me to dig out the following, which I wrote in 2009 to answer the question “What is the world’s rarest plant”: END_OF_DOCUMENT_TOKEN_TO_BE_REPLACED